Emerald Ash Borer (Agrilus plannipennis) (EAB) invaded east central Indiana in 2011. Ginn Woods, among the last and largest remaining old-growth forests in Indiana, presented an opportunity to study the long-term effects of EAB on forest community structure and species composition. In summer 2012, canopy trees were mapped and a geographic database was developed before large numbers of ash trees were infested. In summer 2018, aerial imagery was collected to identify locations of canopy trees that died between 2012 and 2018. In summer 2019, the 2012 tree map was tested to confirm observations from 2018 aerial images. An assessment of mortality rates for ash and other canopy species of interest will be presented along with the updated tree map. 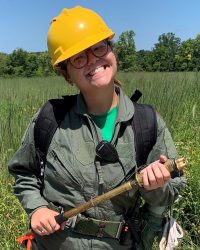 Kerragan Garab
Ball State University
Kerragan Garab grew up on the south side of South Bend, IN, surrounded by corn fields and just 15 minutes from Potato Creek State Park. A native Hoosier, Kerragan recently graduated from Ball State University with a bachelor's degree in Natural Resources and Environmental Management and a minor in Biology. Her interests include: sustainability, environmental education, forest management practices and GIS. Through her academic work and an internship with the Ball State Field Station and Environmental Education Center, Kerragan hopes to find a career in state and/or national parks.