The invasive emerald ash borer (Agrilus planipennis Fairmaire, EAB) has destroyed ash tree (Fraxinus spp.) populations across the US, but remnant populations including many small trees and, more rarely, larger trees remain after EAB had its first major impact across the landscape. Here we model changes that could occur in a preserve’s remnant population of green ash (Fraxinus pennsylvanica Marsh.) after EAB peak mortality (2010-2017) to assess recovery potential. We used population viability analysis (PVA) and created a stage based model with baseline conditions and a model with a recurrent catastrophes, where a catastrophe was defined as a year with reduced ash survival from an EAB outbreak. The catastrophes model had an increasing probability of a catastrophe occurring over ten years and included a gradual increase in ash survival (decline in EAB impacts) over the 9 years following a catastrophic event. We explored scenarios for the catastrophes model including, 1) the reduction of future EAB induced mortality events by half to mimic possible effects of environmental pressures; 2) addition of trees with increased survival to mimic ash restoration. We assume ash restoration can be achieved by planting EAB resistant ash trees, which are currently under development, or from natural selection events, both leading to trees with historic survival parameters. We also performed a sensitivity analysis to assess which size class impacted the population persistence the most over time, and found that the seedling size class was the most influential. There was no risk of extinction under the baseline model and the most sensitive stage class was the Year 1 seedlings. Reduced catastrophe scenario had a 33% improvement in survival when compared to the catastrophes model. Adding healthy ash improved population abundances over time, and reduced the probability of extinction when there were repeated plantings. These scenarios relied on assumptions about how the population would react based on the scientific literature and cautious estimates. This approach provides a starting point for experiments testing individual management treatments to generate testable hypotheses, and the model may be readily updated with new data as it becomes available. Our PVA has revealed potential outcomes which can help increase our understanding of natural ash populations remaining after EAB introduction. 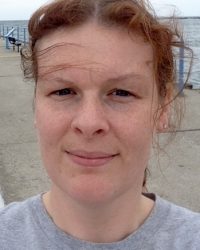 Rachel Kappler
Bowling Green State University
I am a postdoctoral researcher at Bowling Green State University assisting the US Forest Service with their continuing efforts to assess ash tree resistance/tolerance to emerald ash borer. In conjunction with this project I assist with analyzing environmental changes to forest areas across Ohio from this invasive insect. My primary research interests are in conservation and population biology.