We have studied the effects of site preparation, hand pulling of Spotted knapweed (Centaurea stoebe), and burning on restoring native plant communities on a knapweed-infested site in western Michigan since 2009. To further isolate experimental plots from knapweed seedfall, all observed knapweed were removed by hand pulling from 231.25-m^2 internal buffers on four 12.5-m × 42.5-m experimental blocks in June and again in July, 2019. The time needed to remove knapweed from buffers during June varied from 1.6 hours for a block with 0.8 kw/m^2 to 6 hours for a block with 4.8 kw/m^2. Removal rates, however, increased with knapweed density (2.0 knapweed/minute at low densities to 3.1 knapweed/minute at high densities). In July, the percent knapweed missed during the first removal in June was greatest at the lowest initial density (17.6%) as compared to the highest density (4.1%). Hand pulling can be an effective control strategy, especially when knapweed densities have been reduced to low levels by mowing, herbicides, burning, or competition from native plants. At low knapweed densities, however, relatively more time is needed to locate individual knapweed, and it is important to apply the treatment at least twice a year prior to seed fall to remove knapweed missed during the first hand pulling application. 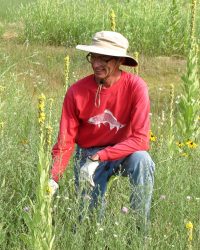