Over the past several decades, climate change has led to an increase in wildfire activity in ecosystems around the world, a trend that is expected to continue throughout the 21st century. Soils store a large reservoir of carbon, and the processing of soil carbon by microbes determines whether carbon remains in the soil or is emitted to the atmosphere as CO₂. Thus, the effects of fire on soil microbial communities are important because changes to carbon respiration and biomass storage will impact fire-climate feedbacks. Our objective was to quantify the amount of carbon respired versus stored in microbial biomass in response to simulated fire effects. We collected soils to 5 cm depth from a mixed-conifer forest in the Cascade mountain range of California, USA as an example of a fire-prone ecosystem. We heated soils in a muffle furnace at 100° C or 200° C for 45 minutes. We added burned and unburned pine or oak litter to the heated soils and unheated controls and incubated the soils for two weeks. We measured soil microbial biomass post heating and at the end of the incubation period. We measured carbon respiration throughout the incubation period using an infrared gas analyzer. Soil heating led to temporary increases in CO₂ respiration, and this effect was positively correlated with heating temperatures. Soil heating resulted in a marginally significant decrease in microbial biomass (p= 0.1). Our results show that soil heating causes a decrease in carbon stored as biomass and an increase in carbon emitted as CO₂, over the short term. These results are important because they indicate that increased wildfire activity may lead to elevated soil carbon emissions into the atmosphere post-fire. 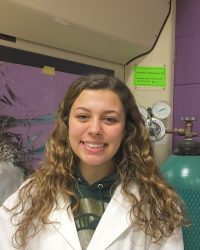