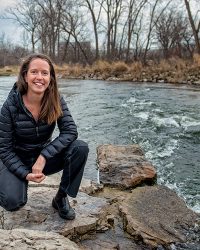 Lisa Brush
The Stewardship Network
Lisa Brush has been leading collaborative conservation initiatives in the nonprofit environmental sector for over two decades. In her role as co-founder and Executive Director of The Stewardship Network she has engaged thousands of professionals and volunteers in identifying community and conservation needs of the 21st century and determining strategic support The Network can provide. Lisa has facilitated strategic planning sessions, focus groups, citizen task forces, community visioning sessions, and public involvement and feedback meetings with groups ranging in size from four to four hundred. Lisa serves on numerous boards of directors, has a BA in Science in Society from Wesleyan University, an MS from University of Michigan’s School of Natural Resources and Environment, and is a graduate of Michigan State University’s Great Lakes Leadership Academy. 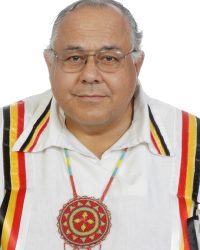 Frank Ettawageshik
Association on American Indian Affairs
Frank Ettawageshik lives in Harbor Springs, Michigan, with his wife Rochelle.  He has four adult children and six grandchildren.  He is a traditional storyteller and potter, believing that native people need to be rooted in their traditions in order to be prepared for the future. He served in tribal elected office for sixteen years, fourteen as the Tribal Chairman of the Little Traverse Bay Bands of Odawa Indians in Harbor Springs. During his tenure as Tribal Chairman he was instrumental in the adoption of the Tribal and First Nations Great Lakes Water Accord in 2004 and the United League of Indigenous Nations Treaty in 2007.  Now serving as the Executive Director of the United Tribes of Michigan, he is also the Chairman of the United League of Indigenous Nations Governing Board and the Co-chair of the National Congress of American Indians Federal Recognition Task Force. Frank currently serves on several non-profit boards including the Association on American Indian Affairs, Anishinaabemowin Teg and the Michigan Indian Education Council.  In April 2016 he was appointed to the Great Lakes Water Quality Board.  Frank was a 2010 Fellow at the Native Nations Institute Indigenous Leaders Fellowship Program at the University of Arizona. His 40 years of public service have included serving on the Executive Board of the National Congress of American Indians, the Midwest Alliance of Sovereign Tribes, the Historical Society of Michigan, the Chippewa Ottawa Resource Authority, the Michigan Climate Action Council, the Little Traverse Conservancy, the Michigan Travel Commission, the Public Interest Advisory Group for the International Joint Commission’s Upper Great Lakes Study, the Michigan Great Lakes Offshore Wind Council, and the Michigan Ground Water Conservation Advisory Council. In December 2015 he attended the United Nations Framework Convention on Climate Change, Council of the Parties 21 (UNFCCC COP21) in Paris, France, as a delegate from the National Congress of American Indians.  Approximately 45,000 people attended COP21 including over 100 Heads of State.  Frank joined approximately 200 Indigenous Peoples delegates as a member of the International Indigenous Peoples Caucus on Climate Change.